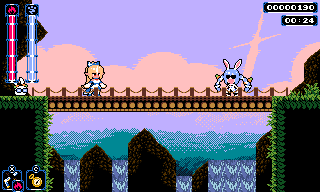 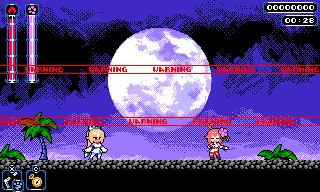 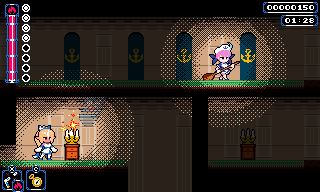 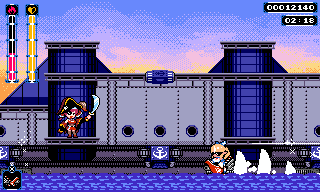 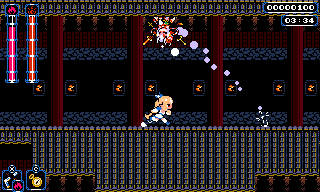 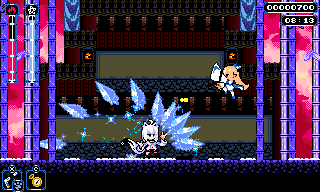 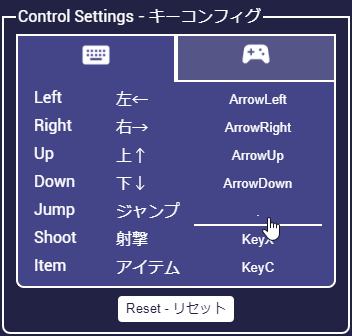 Default controls for gamepad (connect it by clicking any button)

Progress is saved automatically! Unlocked stages, weapons and achievements are accessible in the save menu using the mouse.

I got carpal tunnel because I thought I could survive fighting Noel. The game is still amazing though, I kinda wish there was a different button for charge and fire instead because rapidly tapping to shoot really hurts. I had to use Turbo mode on my controller just to beat Fubura Tower by spamming and time stopping just to shoot the head.

I loved this! The style was great! Though, The bullet hell aspects of some of the boss fights made it a little annoying. Enemies were designed great (though a healthbar would be a good addition) And maybe a tutorial sign in the first area, as i had to go back to the game page to see the controls. ALSO! It needs pause feature >_>. I like the way that you unlock the different projectiles! Its very unique and interesting. Maybe have each different projectile mode have a slightly different basic attack? Maybe even just a different texture. It would add a cool amount of depth to the attack system. Overall, a really fun game!!! Ill watch this with great interest :)

Thanks! I love the idea of slight differences for basic attacks! In the next update the slide will allow you to dodge attacks, which will make the bullet hell phases less frustrating. I'll think about a pause button (or maybe something automatic every time you open the menu)

if i play on browser does it save my progress when i close the game? or i have to start all over again?

Progress is also saved on browsers!

this game is really good but is there a way to save progress?

Progress is saved automatically, you can move your mouse to display a save icon in the upper left corner and open a window that lets you access unlocked stages

Ayame bossfight is my favorite.

Hi! The bow is disabled for the moment, I'm not sure to put it back since it doesn't add much more than the guns

Amazing game, played through it all! Just please take the power change off of the up button I kept changing my weapon on accident. Thank you for making this!

Thank you for playing! I plan to add two new buttons for switching weapons

Awesome looking forward to it

My god... this is the best fanmade game i've ever seen! Can't wait for the complete game

Such a high quality game! I could imagine playing this on the GBA. And the music is sick!

Uninstalled the old version (before the guns update) and reinstalled, but now the map with the bow has been replaced with a checkpoint and I can only pick up the guns.
Also, I somehow managed to activate the other checkpoint on the fubuzilla bot battle which let me skip it after I died.

what to do on the fubuki part?, i honestly dont know how to progress (the robot part)

You need to concentrate on shooting the very top part. Any damage done to other parts of the robot doesn't go towards defeating it. The transparent platforms under the robot can actually be moved through, so you can use those platforms help you get up. Also, keep in mind that you can double jump (I actually didn't notice until I got to this boss.)

The music is amazing and the gameplay very faithful to Megaman, while having its own Holo-Style, congratulations that's amazing!

I tried attacking aqua using marine's special the 1st time she appears in the dark room where you had to light the candles. the game froze XD.

dang you built your own custom engine for this game? Did you by chance record any of that process? What made you decide to do that rather than just use an established engine already? I get you're probably an experienced programmer, but it leaves me curious. Are your future game projects using this same custom engine?

There are no records of the creation process as it is an amalgamation of several attempts over several years. I have used most of the mainstream game engines, but in the end I've always had more fun messing around in a web browser.

I recently posted on twitter another game I'm working on, it's a trpg that uses a similar base although the result is very different

If you pick up guns, skip the bow and restart you can't get bow anymore even after restart

if you click the save or disk on the right side of the settings or the gear, you can choose there.

Super fun, found the pistols easily and played the whole game with it.

the boss fights were amazing, I got totally destroyed by the first boss because I was only pressing one time to attack instead of spamming X. And miko and pekora was tough man, but very fun too.

excited to play the full version.

This is a very cool game with cool mechanics that complement the main gameplay!

It was fun, interesting, scary, but it was worth it, so I'm waiting for the rest of the levels and good luck =D

This Game is Pretty Fun

-Stage and Bosses is Fair

-Weapons are still not reduced or increased damage by boss

This game is EPIC

but the game freeze and I can't do anything https://imgur.com/a/6EOxYTk

Excited for the full ver, thank you!

Wow this was a lot of fun!

... and another thing, what kind of engine are you using? Because the browser version has this unique UI and stuff I didn't see in other browser/HTML5 games I found.

Edit: 1; I find it kind of funny the new gun weapon has a run and fire(?) animation while the bow doesn't. and 2;

Edit 2: I also recently found a bug(?) on the browser ver. at least that (if?) I waited for too long on a level (and probably also have your screen off the game) (I found it in the [WIP] Yamato level at least), it speeds up the game drastically for a while, will you fix that?().

Thank you! I'm glad it's looking more and more like a proper game.

I built the game engine from scratch, so it's completely custom. The code is open source, link available in the information!

Building a GAME ENGINE from scratch (either Scratch.mit.edu or the literal term) is very impressive, and it is nice that people can also use the engine for themselves for their own projects if they want to if they want to.

This fast game speed glitch comes from the way your browser changes its refresh speed when you are not looking at the game (when you scroll down in the comments for example). I can't do much about it, but the speed will adjust itself if you wait a few seconds 😰

Yeah I know. I discovered this when I wanted to add something down in the comments, and I just so happened to discover it when checking the game for something🤷‍♀. Just wanted to see if you could fix/do anything about it.

And one last thing, how do you pause the game again?  Before, the game was able to be paused, probably with ESC. I don't remember myself, especially since I 1, want to pause the game to take a break and come back later, and 2, to not have to find a safe place to "Pause", not have the music bother me (Edit: I was joking, the music is great!😁) and not worry of the timer rising, as it'll also make it easier to do the timer achievements.

You know, just generally have a pause menu🤷‍♀, since its so weird not having one on a game like this.

ok, the installer finally worked, gonna play it later and update my ratin

I'd really enjoy this game more if i could play it with a controller instead of a keyboard.

From the looks of the UI, They will implement it soon

I strongly recommend the software antimicro!  It’s helped me rig up a setup so that I can play the games that don’t offer controller support — it’s been a game changer, for me!

Reply
Ogull177 days ago
i thought i found a secret place, but instead found a bug (?). Loved the game!
Reply
sulpx177 days ago

Thank you for playing! This bug is fixed in the next version which should be released soon 😵

Sheesh, last time I played there were 2 stages and they were a bit different. The changes are cool and makes good usage of slides ^^

Ill be looking forward to more updates. Ty for the awesome game

Thank you for playing and for the bug report! Aqua won't be invincible in ng+ in the final version of the game if I' m doing everything I planned

ok, the other exe opens then closes, hm, well, i finished the game on browse

Also some visual difference between arrow types would be nice, even if I'm not sure changing the type does anything

changing the power changes the charged shot, not the arrow on its own

When I try to install the game the setup says "There's a problem with this Windows Installer package. A program runs as part of the setup did not finish as expected. Contact your support personoel or package vendor." Thus the install cannot success. Please prepare a fix for downloadable version if possible.

You are not the only one to have this problem apparently, the reason can be varied so in the meantime I advise to just play on browser. I'll put an excecutable file without windows installer soon and if it doesn't fix the problem then it will be for the next update. Thank you for letting me know! 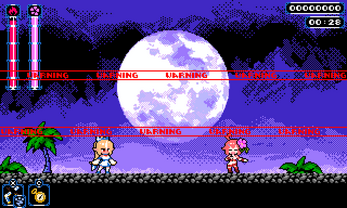 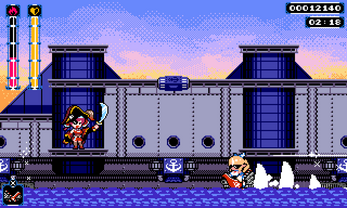 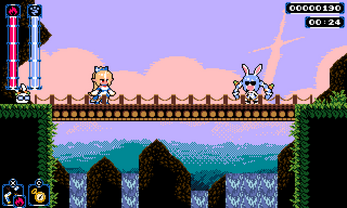 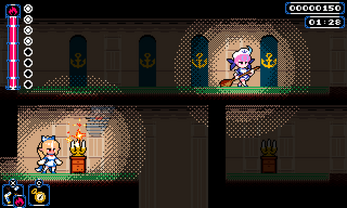